In the beginning, settlers reached Provost, Alberta by oxcart, horse drawn wagons and on foot from the railhead at Battleford, Saskatchewan. In 1909 the railroad finally reached the hamlet from Hardisty, Alberta in the west. The town was first established by Canadian Pacific Railroad (CPR)’ surveyors shortly after the turn of the century. Provost is the title applied to the chief magistrate of a Scottish town and is the equivalent of “mayor” in Canada. The origin of the name is uncertain, but since the streets were originally named after Scottish urban centers, the name Provost may have been chosen to indicate the principal role of the town. Consistent with its origin, the name of the Town is pronounced as it is spelled and not in the French or military style. Although streets and avenues today are numbered only, the avenues were named to commemorate Canadian associations in the beginning. In 1910, Provost was incorporated as a village with Mr. N.A. Kilburn as Reeve. In 1952 the village became a Town with Mr. Dave Johnstone as Mayor. Some of the pioneer businessmen started their enterprises in tents and shiplap sheds. This was the start of the commercial development that today serves as the regional center of a very large rural area. Provost is the seat of the municipal government for the M.D. of Provost No. 52.

A large wheat stalk on each side dominates the Town’s Coat of Arms, symbolizing the agricultural history of the community and the peace pipe in the center is reflective of the signing of Treaty No. 6 at Sounding Lake, located directly southwest of Provost.

In 1908 the original Methodist Church was built (later serving as the Masonic Lodge Hall and today, as the Provost Community Church @ 5140 – 51 St.), followed by the Anglican Church that same year. The Canadian Imperial Bank of Commerce began operations also in 1908 in a two-story white frame building on the same location the present day bank stands. A Catholic Church was built in 1910. Provost’s first newspaper, the Provost Star, also started publication in 1910. 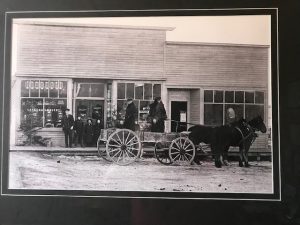 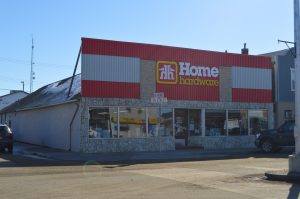